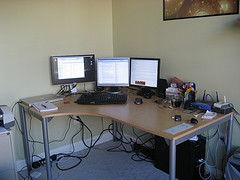 Most people have heard of identity theft, but not everyone knows how it happens.   The act of committing this malicious and dangerous   crime may be simple or complex, and can be fascinating to study.

Identity theft happens when a thief assumes another individual’s identity and uses confidential information intended only for the owner’s exclusive use.  Using the stolen name and important confidential information, the criminal commits fraud without the victim ever realizing the transactions have taken place.  When the crime finally comes to light, the thief is long gone in excruciating anonymity, leaving behind a stained reputation and a devastating paper trail of ruined credit and mounting debt.

The past several years have brought about an alarming wave of identity theft crimes in different areas dealing with economic transactions and personal information.

Banks continue to be repeated targets of identity thieves.   Long before there were credit cards, airlines, medical communities,  job banks, social security or the Internet, there was bank identity theft.   Incidents of bank identity theft can vary.  Some cases involve a thief continuously withdrawing huge sums of cash from another person’s bank account, until the account is drained.   Other cases may involve the thief assuming another individual’s name and using their personal data to obtain a bank loan.

Armed with the victim’s personal information, an identity thief can obtain a driver’s license, open new lines of credit and bank accounts, and get a mortgage and even buy a car.  Statements and bills from these transactions are diverted to the thief’s temporary address, so the victim never learns that a crime has been committed.  Once the plan has been established, the thief bilks the victim’s credit line for all it is worth in cash advances, credit card debt, and loans without intent to pay.  All of these crimes happen with the thief, hidden in a shroud of anonymity, and when the debts come to light and the walls come crashing down, the victim is left holding the bag and the thief is long vanished.  It can take years to recover emotionally and financially from identity theft.

Bank and personal identity theft is a nightmare for the millions of people who have fallen victim to this overwhelming crime.  Reported numbers of those victimized have reached into millions.  Sadly, despite stricter bank transaction steps and the imposition of federal and state laws, the number of identity theft victims continues to rise each year.

In the United States and Canada, many people have reported unauthorized individuals withdrawing funds from their personal bank or financial accounts.  More serious cases have seen victims exposing a thief who has totally taken over their identities.  In these cases, thieves have run up large debts and committed crimes, all under the name of the victim.

In one notorious case of identity theft the criminal, a convicted criminal, incurred more than $100,000 of credit card loans.  In addition, the thief obtained a federal home loan and bought homes,  handguns, and motorcycles using the victim’s identity.  With maniacal pride, the criminal called his victim to ridicule him, declaring that he could continue posing as the victim for as long as he wanted.  During that time, identity theft was not yet a federal offense.  In the end, the crook filed for bankruptcy still using the victim’s name.

Although the criminal was trapped, he served only a brief sentence for his crime.  The victim and his wife however, spent more than four years working to restore their credit and reputation.  It cost the family more than $15,000 of their own resources to win back their credit.  The criminal did not make restitution for all the damage he had caused.

On a positive note, due to this case and others like it, the United States Congress mandated a new federal offence against identity theft in 1998.

You can keep away from being a victim of bank identity theft.  Understand and be aware of the red flags that may specify that you have fallen victim:

*  You are billed for a credit card that you did not open.

*  There are unauthorized notice charges on your credit card statement

*  Bills or credit statements fail to arrive when you expect them.

*  Unauthorized transfers or withdrawals show on your bank statements.

*  You receive calls or notices about merchandise you did not buy.

*  Debts appear on your credit reports that you did not file.

Prevention is your best security.   Know the red flags, understand the dangers, and you can guard yourself from becoming a victim of identity theft.